According to the United States Golf Association (USGA), there is no rule on bunker rake placement. Although the USGA does place all rakes outside of bunkers for their Championships, for daily play the USGA understands that placing rakes inside bunkers is often beneficial and preferred at most golf courses. Among other reasons, if the rakes remain inside the bunker, mowing and mobility of other golf course equipment around bunkers is more efficient. Placing the rakes inside of the bunker has been the protocol at Olde Florida Golf Club since its inception in 1993. The bunkers are raked every day at Olde Florida. Each morning after a member of the golf course operations staff rakes a bunker they place the rake on a flat portion of the bunker several feet inside the bunker. However, the rakes are never placed along the back edge - in the “line of play.” Placing the rake several feet inside the bunker, on a flat surface, is done to prevent a ball from coming to rest against a rake on a steep slope within the bunker, a hazard.


Regardless of bunker rake placement, if a ball comes to rest against a rake, and the ball moves once the rake (a movable obstruction) is removed, the USGA Rules of Golf require that the ball be replaced (see Rule 24-1). IF the rake were placed on a steep slope, replacing a ball on the slope is not always possible. If the ball won’t stay where it must be replaced (Rule 20-3d), or anywhere within the bunker not nearer the hole, the player may either drop the ball, under penalty of one stroke, outside the bunker (Rule 1-4; Equity) keeping the point where the ball lay directly between the hole and the spot in which the ball is dropped, or play under the stroke and distance option of the unplayable ball Rule (Rule 28).
Posted by Darren J. Davis, CGCS at 11:31 AM No comments:

This summer Olde Florida Golf Club initiated a property wide Brazilian pepper eradication project. To insure quick and complete eradication of the species a contractor was hired. All of the Brazilian pepper will be cut at the base of the tree and the plant material chipped and dispersed on the forest floor. The stump will be treated with a non-selective herbicide to prevent regrowth. 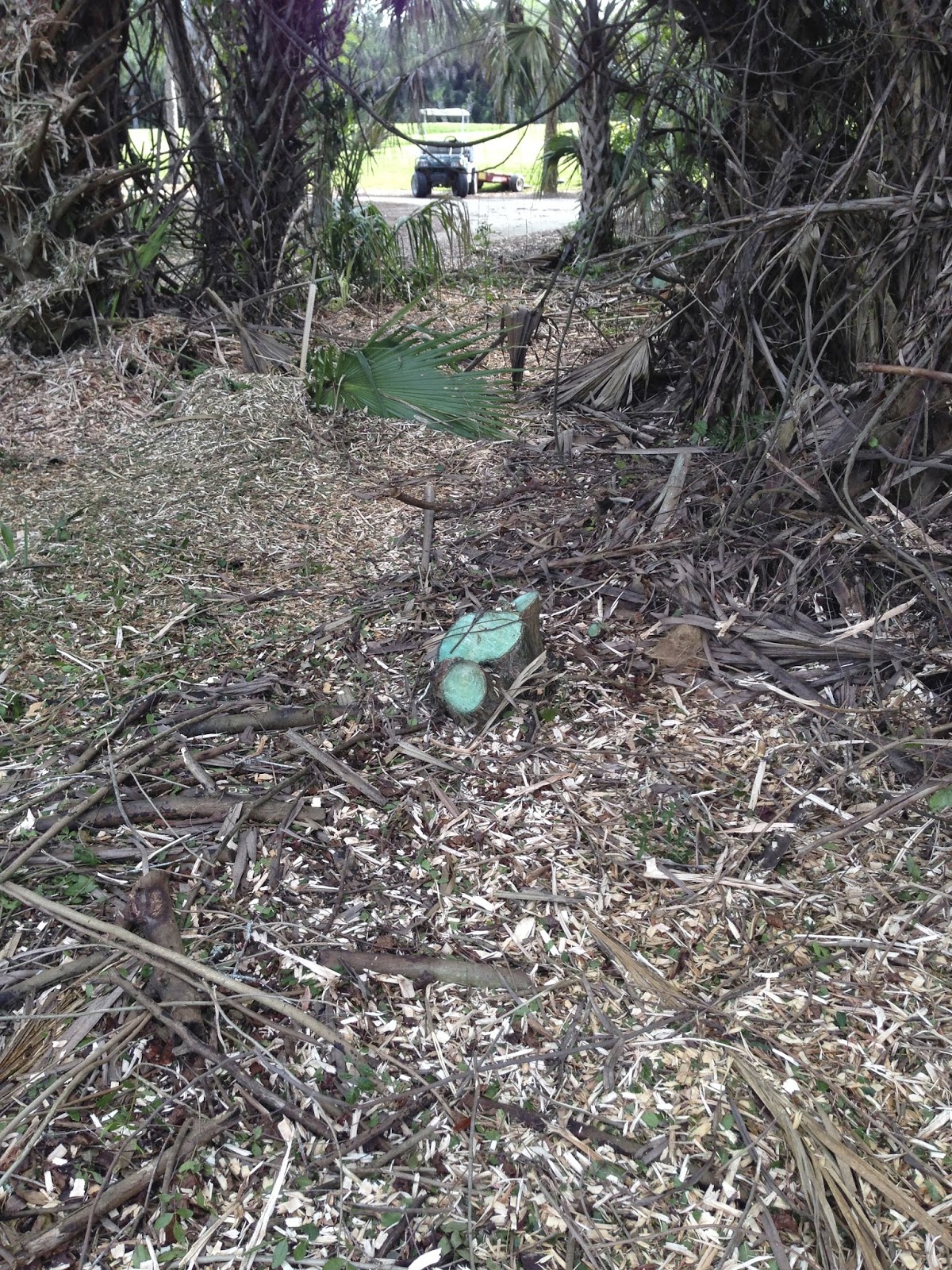 Brazilian pepper is one of the most aggressive and widespread of the invasive non-indigenous exotic pest plants in Florida. It is estimated that over 700,000 acres in the state are infested with Brazilian pepper.
Brazilian pepper produces a dense canopy that shades out all other plants and provides a very poor habitat for native species. Brazilian pepper invades aquatic as well as terrestrial habitats, greatly reducing the quality of native biotic communities. In part, the invasiveness of the Brazilian pepper can be attributed to the high germination rate of the seed. Birds and mammals are the primary mechanisms for dispersal of the fruit/seed. 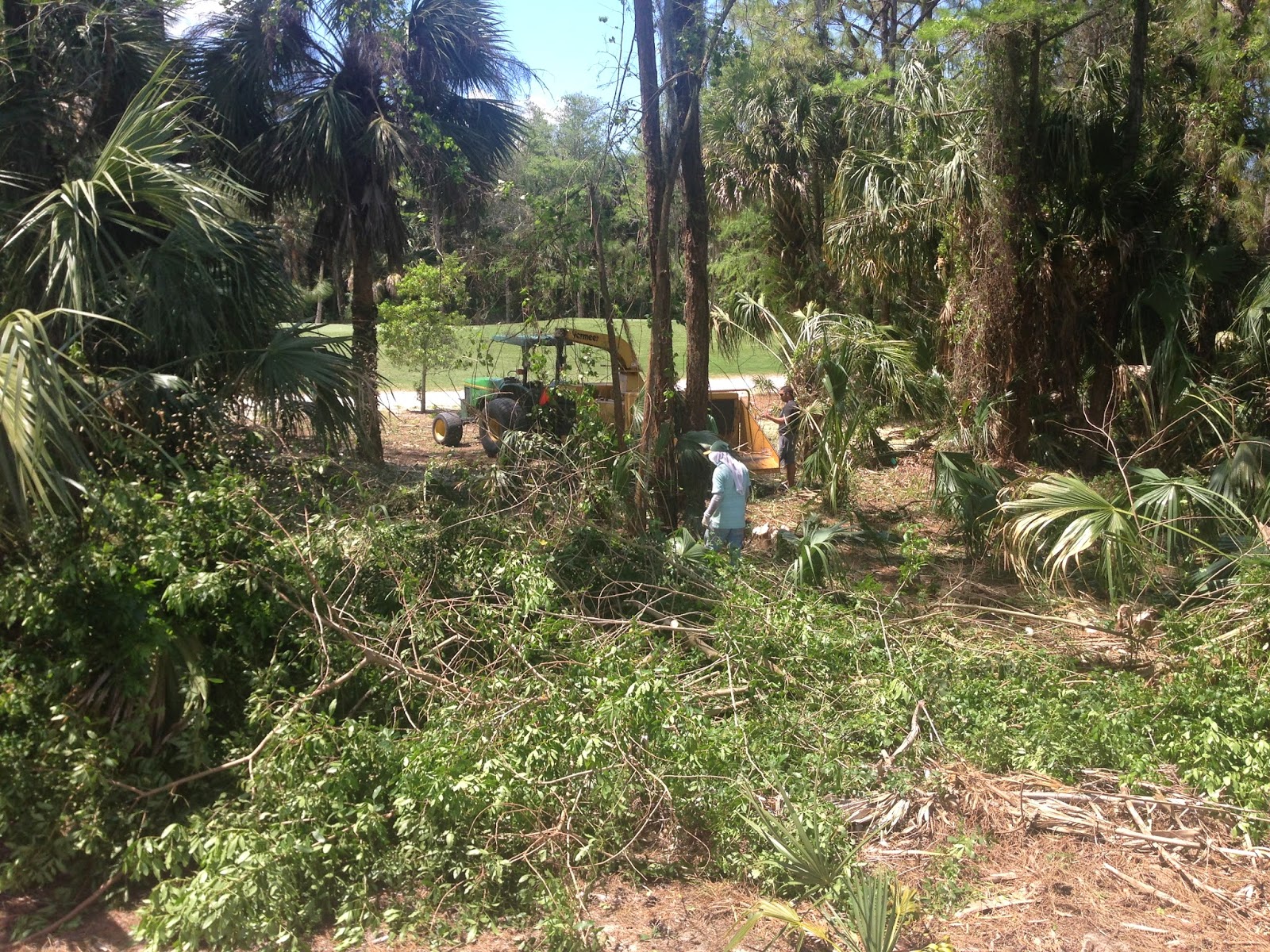 One of the benefits of the removal of the Brazilian pepper is that it will allow native species to return. The cover from the native plant community will help suppress the return of the Brazilian pepper. However because of the rapid growth and high germination rates the club will begin a contracted annual inspection and removal program.

The bird has left the nest!

Or, in our case... the birds have left the nest! 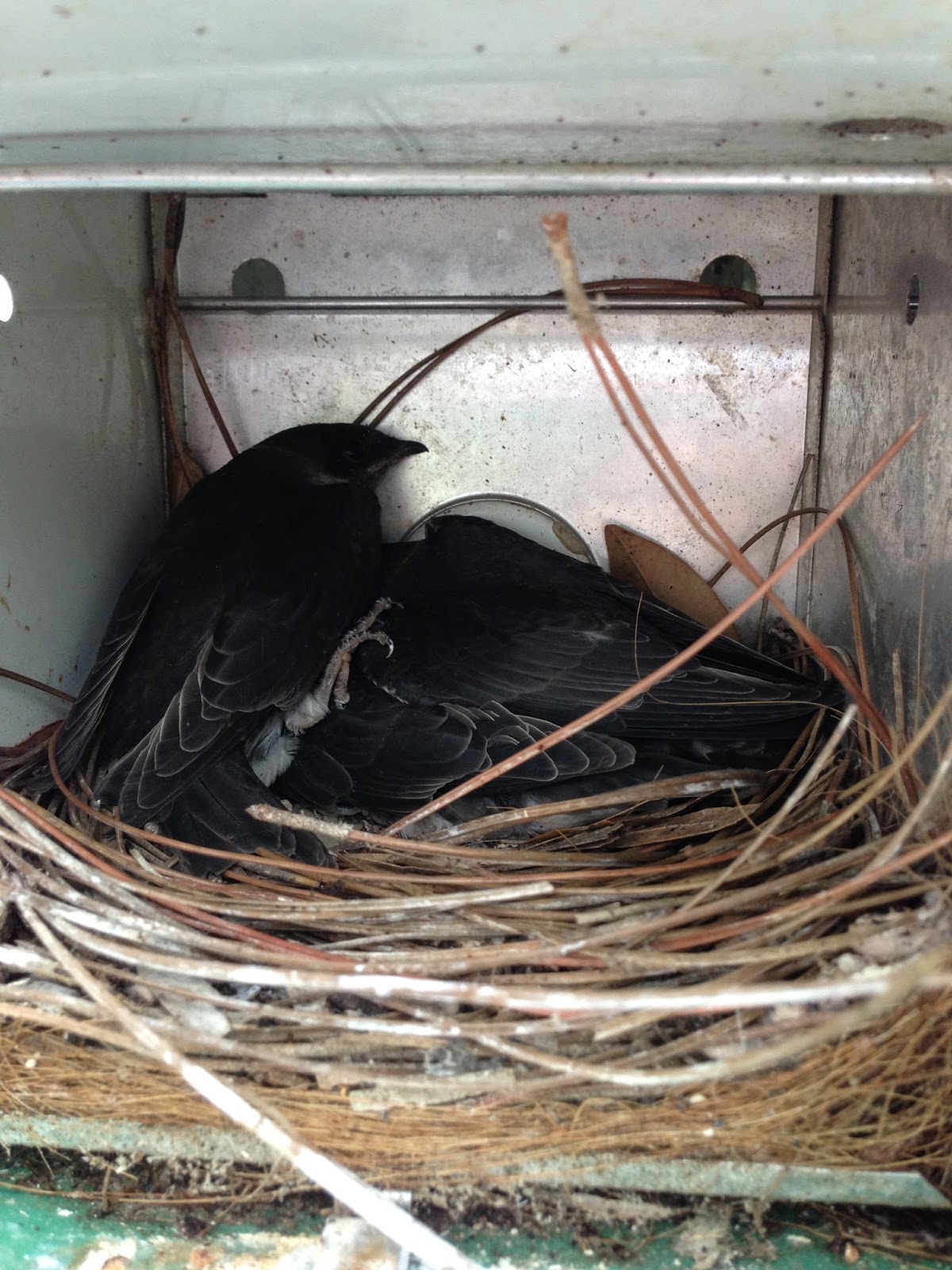 Two years ago, in early winter 2013 we installed a Purple Martin house at Olde Florida Golf Club. The house was installed near the lake that separates hole #2 and hole #10. In our first winter with the house, we successfully fledged three Purple Martins.

Purple Martins migrate each winter to South America. However, they remain incredibly faithful to their colony (nesting) sites each year, often returning to the United States about the same date. This was the case at Olde Florida. The Purple Martins from 2013 returned in late January 2014 to again utilize the nesting structure and this year over a dozen Purple Martins were fledged at Olde Florida. 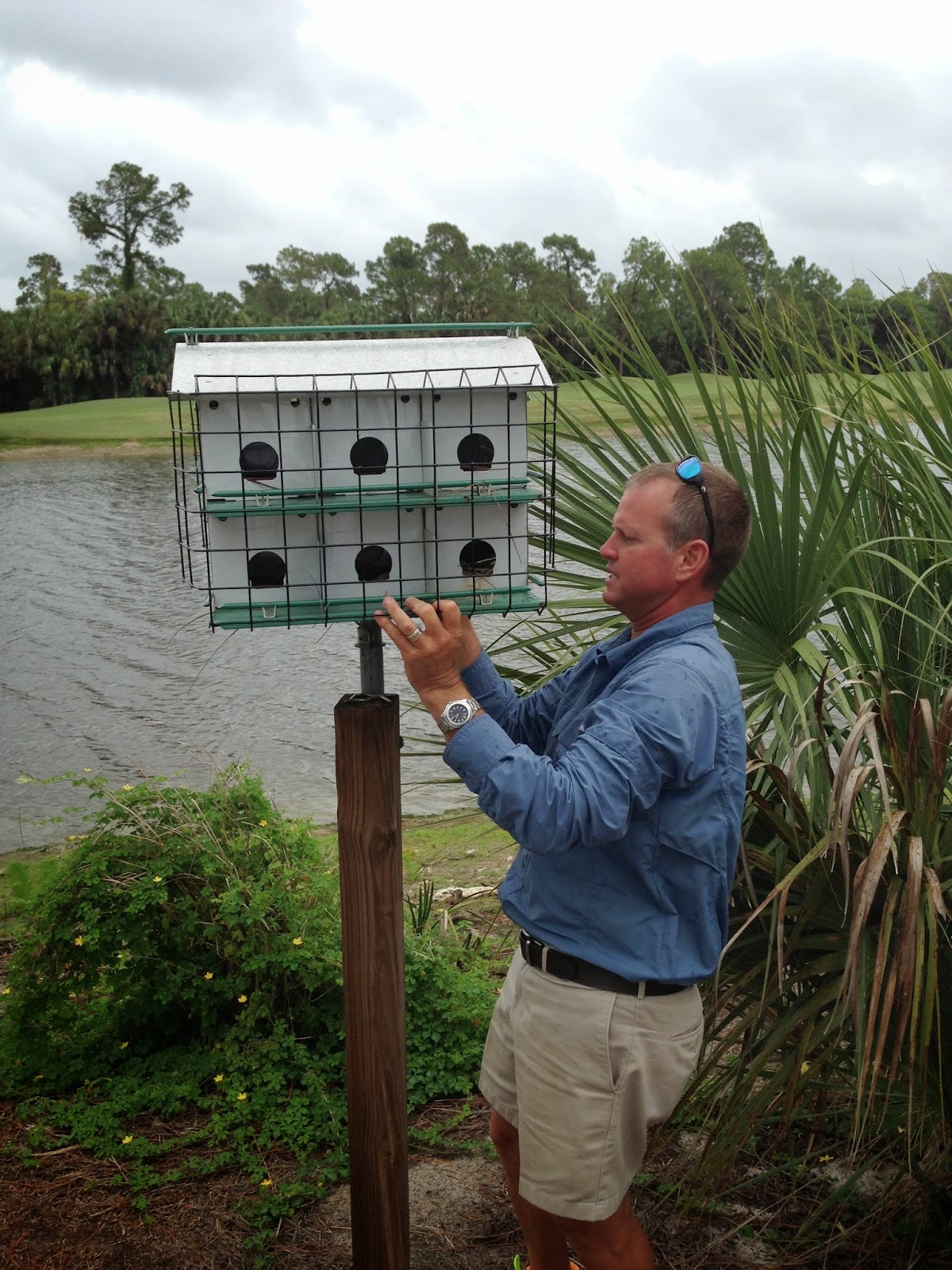 Purple Martins are quite friendly and prefer to nest in close proximity to people, which make golf courses a perfect location for the bird! Interestingly, Purple Martins are the only bird species that is totally dependent on human supplied nest boxes. Qualities that make the martins desirable are they nest in colonies and have fascinating social behavior. Their vocalizations are also quite beautiful, they are extremely graceful in flight and they consume vast quantities of insects.


The Purple Martin house at Olde Florida has been lowered for the summer, but since the nesting structure has been so successful our the plan is to add an additional house next year.
Posted by Darren J. Davis, CGCS at 5:58 PM No comments:

Where there is smoke ... there is fire!

Golf Course Superintendents often wear many hats and by nature are problem solvers. Sometimes the problem to be solved involves putting out a fire… literally.

Daily thunderstorms are a fact of life in Florida. In fact, with storms occurring approximately 100 days out of the year, Florida is known as the lightning capital of the United States. June 1 begins the unofficial start to our thunderstorm/rainy season at Olde Florida, and each year at this time we become concerned about forest fires started by a lightning strike. 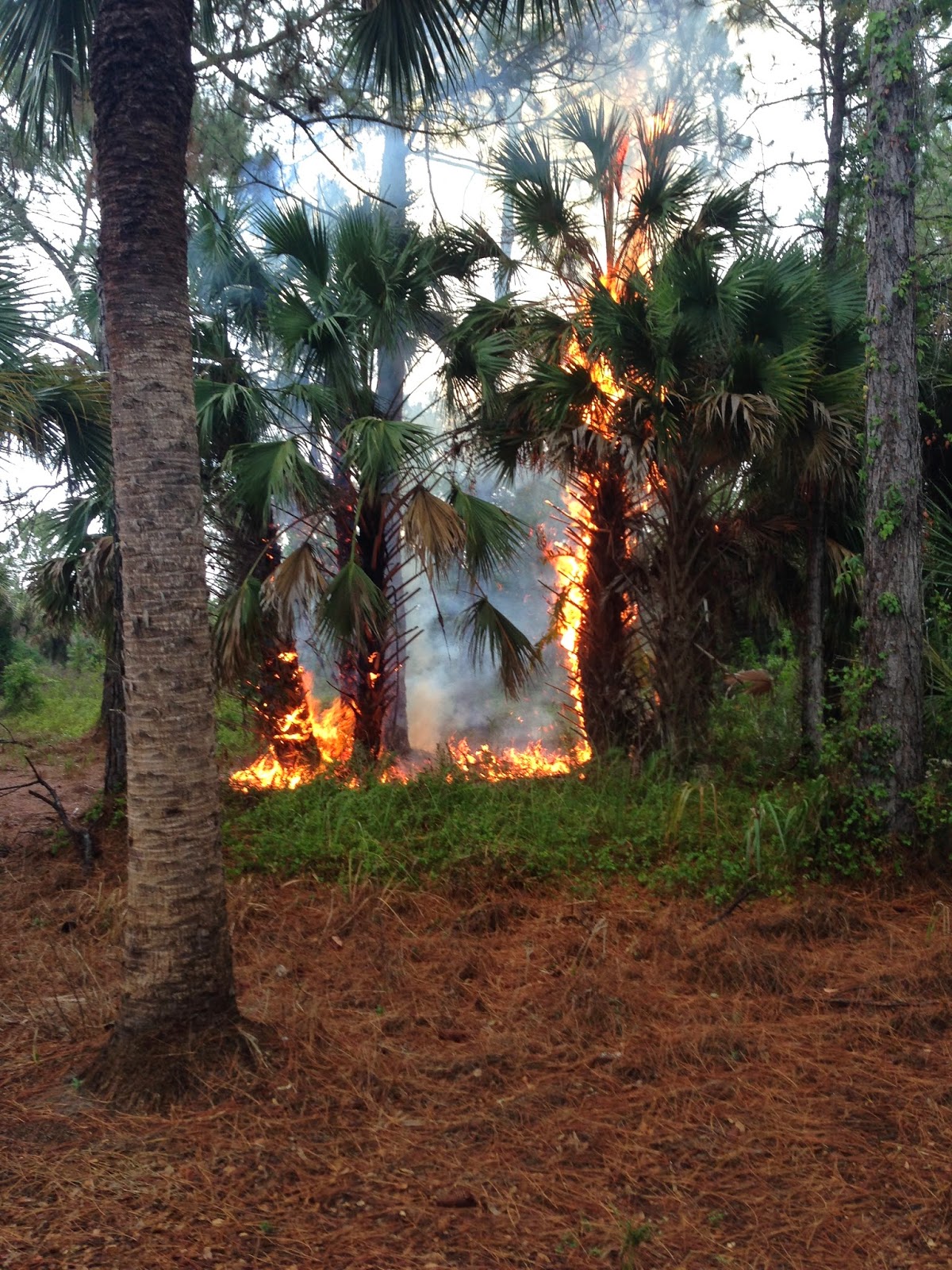 In our area we are particularly concerned with lightning and forest fires because the rainy/storm season begins immediately after the dry winter season. The average monthly rainfall in the winter (November through April) is only 2 inches. Consequently as we enter June the ground is very dry and the potential for a devastating forest fire is heightened.

Almost as if somebody “flipped a switch” last week the storms began and the first lightning strike of the year produced the first forest fire of the year at Olde Florida Golf Club. Fortunately a light rain followed the lightning strike, and the golf course operations staff was on property and extinguished the fire before it had a chance to spread.

Immediately after the fire was spotted, a fire line was established by removing the organic matter from the soil using a front-end loader. As this was being done other staff members filled portable water tanks and loaded sand in the back of utility vehicles. Within a few minutes the fire was contained, and shortly thereafter extinguished.  With the average monthly rainfall being 9 inches in June the ground usually becomes saturated fairly quickly.

A Breath of Fresh Air...

Today the golf course operations staff is “aerifying” the tees at Olde Florida Golf Club. When hollow tine aerification (also known as aeration) is performed it achieves four important objectives; it increases oxygen levels in the soil, it relieves compaction, it provides a method to improve the soil and it reduces or prevents the accumulation of excess thatch. All four functions of aeration are key to the overall vigor of the turfgrass and playability of the golf course. 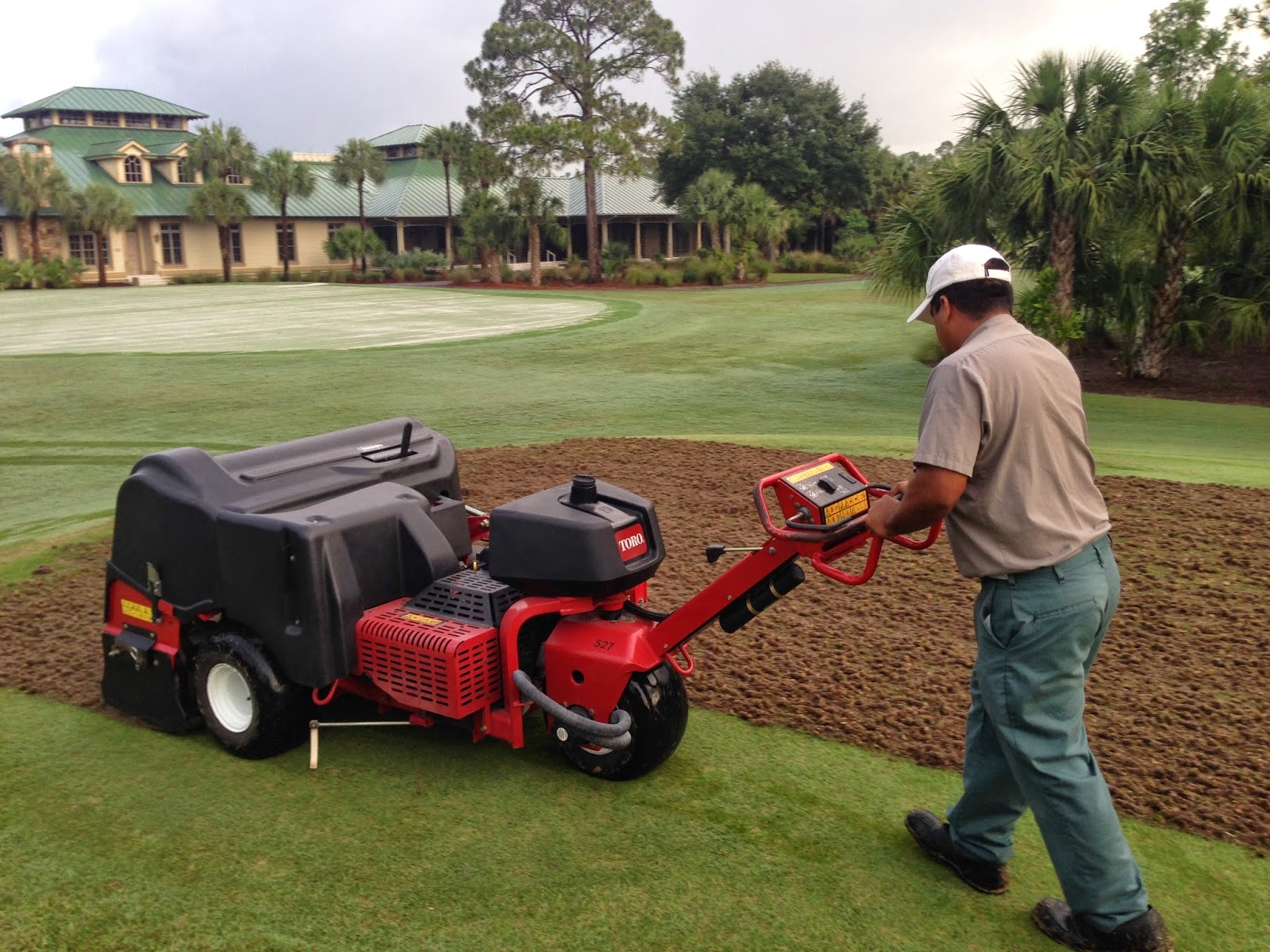 Traditional (hollow tine) core aerification is always performed in the summer months at Olde Florida Golf Club. Among other reasons, this is when the warm-season turfgrass (bermudagrass) is most actively growing and the length of recovery is lessened. 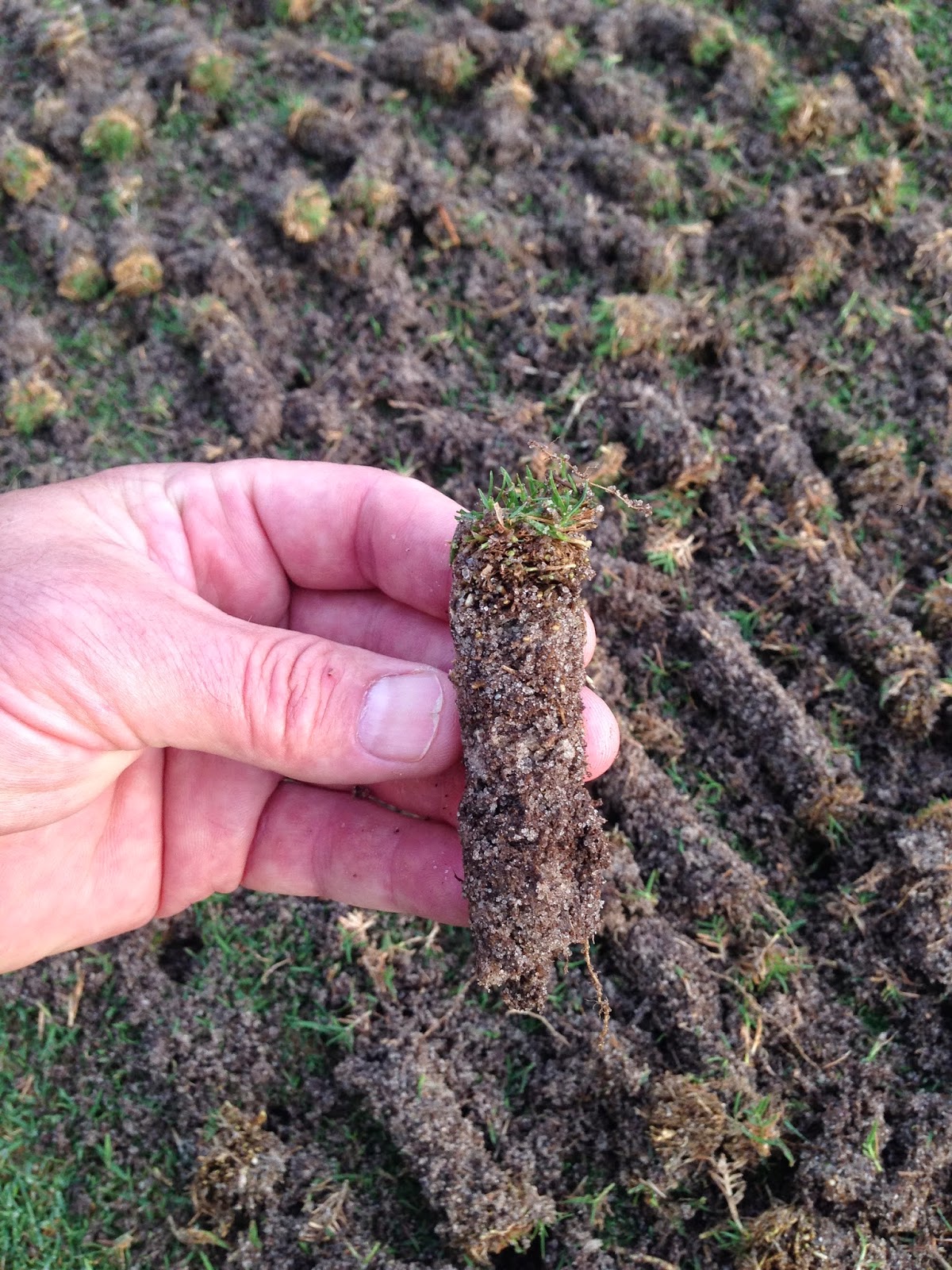