The Shortest Day of the Year .... and Why it Matters

Today, December 21, is the winter solstice and that means it’s the shortest day of the year for those living in the northern hemisphere. Technically speaking, the winter solstice is when the sun is directly over the Tropic of Capricorn, or 23.5 south latitude. Non-technically speaking, it's the day when the sun rises and sets to our south at the lowest angle, and it marks the first day of winter.

Because the earth orbits around the sun on a tilted axis, between September and March the entire northern hemisphere gets less exposure to sunlight. Because of our location, it’s not a coincidence that these months coincide with the seasonal influx of residents to Southwest Florida and the play at Olde Florida Golf Club is at its peak.

In basic terms, for turfgrass to thrive it needs sunlight, the correct amount of water, adequate fertilizer and a good soil structure. Of these needs, the one that is least in our control is sunlight, which is why an understanding of the earths rotation and the winter solstice is vital.

Since the duration and intensity of the sun's rays (and air and soil temperature) is out of our control, it is extremely important to have plant health peaking on this day and do everything in our control to maintain plant health for the next 60 days. By March 1, the nighttime temperatures have increased, the sun is high enough in the sky and  the days are long enough that sunlight essentially becomes a non-factor. 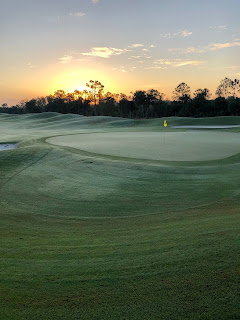